Hi.
To be brief, the issue is that my relay connection is likely to break in a certain period of time, causing network service failure.

I used to raise the issue Losing Connection Every 30 minutes in the community. After I found this issue, I made a lot of test, trying to figure out when and why this issue happened. I found that if two devices were linked in relay mode, the connection between was likely to break and restore about every 30 minutes, no matter the moon or the offical planets were used. During the failure, ping command returned timeout and host is down. After the connection restored, the delay decreased in the very beginning several packages, just like the connection was newly established.
I made a lot of modification to my moon service, including upgrading the docker image, re-configuring moon service, or even deploy ZT service directly to the server instead of using docker, none of these worked. And if I deorbited the moon and used official planet server to transfer data, the same problem still occurred.
So I wonder if there’s something wrong with my configration, or is there a limit like the relay link will be restored after a certain time of connection?
Thank you!

I attached some screenshots for more info. I was using ping command for the test. But when the ping returned timeout, other services like SMB file sharing also failed, so I don’t think it’s a ping-specific issue. And this issue happened on both MacOS and Windows. 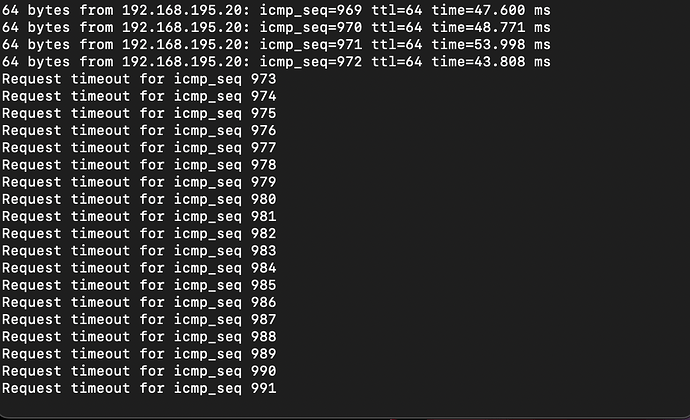 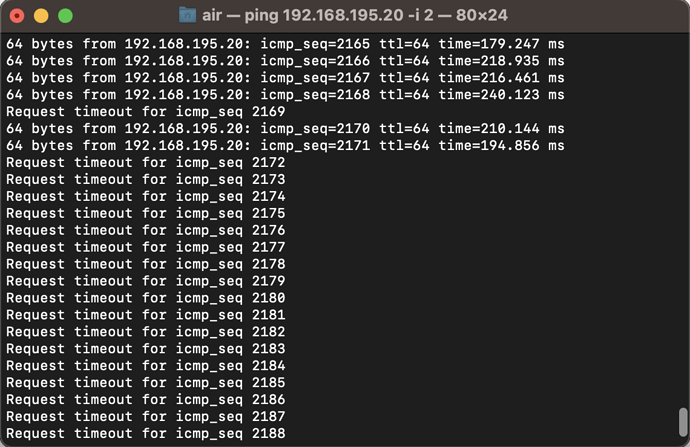 After a huge amount of testing, I basically narrowed the cause down to the docker image I was using on one of my devices. So I changed the docker image and saw some improvement. Further test would be carried out to see whether the problem is totally solved.
Sorry for bothering guys. If the problem shows up again, I’ll return for more help.
Thank you.