I use my Mac (Monterey 12.5) to join a network that has been created in Zerotier. But it stuck on REQUESTING_CONFIGURATION and then ACCESS DENIED.

The problem still exists after I try to join the network several times, restart my Mac, and even uninstall and install Zerotier again and again.

The connection request does not appear in the network list. If so, I can authorize it directly and it would not be a problem.

I sincerely hope that anyone can give me help. 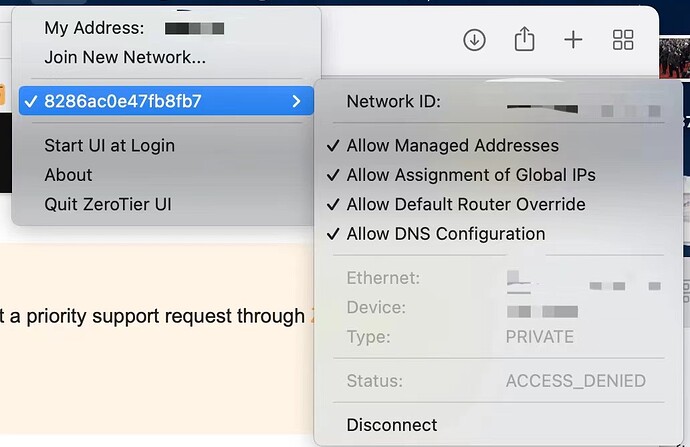 I don’t know what could be causing this, I have seen it only when a client, that was deleted from the network, tries to re-join.

However, you could try manually adding the client in the Zerotier Central console.
Then it would appear on the member list and you can authorize it.

The situation is that I try to join the network, but my request does not appear in the list of the Zerotier Central console.

By manually adding the client to the Zerotier Central console, my Mac finally join into the network.

Thank you very much for your solution. It helps me a lot.

Thank you again and best regards!